More than 46,000 new build homes were completed in the final quarter of 2017 in England, the largest volume of available homes since the fourth quarter of 2007 and the third largest since 1990. Developers remain confident they can find buyers for the properties they are building. This confidence has underpinned the upward trend in new starts in the last couple of years.
New Build Starts & Completions
New build home starts and completions (England)
Help to Buy has made owning a home more achievable for some. Between its launch in April 2013 to March 2018, figures published indicated that nearly 170,000 properties were bought with an equity loan. In London, the maximum equity loan increased from 20% to 40% in February 2016 and since then more than 8,000 London new homes were bought through the scheme, with more than 6,500 purchased with an equity loan higher than 20%.
Source: Ministry of Housing, Communities & Local Government 201828

Anish Thobhani Director of Customer Operations –  There are around 4.7m households within the private sector and it’s predicted to grow to 7.2m by 2025. Lifestyles are changing and for a growing number, renting isn’t something people have to do, it’s something they choose to do – driven by a desire for flexible, hassle-free living, often in a convenient city centre location. Build to rent projects speak to these tenants as they are designed with renters in mind. Services and amenities are plentiful, with elements such as complimentary superfast broadband, residents’ gym, residents’ lounge, guest suite, private dining, social-work space, and roof-top gardens featuring heavily in properties managed by Grainger. We’ve recently launched a project in Manchester and we’re building a number of projects across the UK, including Bristol and Birmingham. Developers who build for the scheme will benefit from attracting settled tenants who want consistent, longer tenancies. Letting agents who operate a tenant find service won’t have any trouble finding applicants for these attractive rental properties. Tenants will find a property to rent which is more than a flat or a house, it’s a home

Stewart Baseley Executive Chairman – Home Builders Federation “Although we have seen an unprecedented 74% increase in the supply of new homes over the last four years, demand still outstrips supply. All indicators suggest increases will continue – provided we have a level of economic and political stability. However, the Government’s target of 300,000 additional new homes a year is a very challenging one. Despite the record levels of output, we are still only adding to our housing stock by around 220,000 homes a year. Builders have focused heavily on how they attract more people into the industry; on how they train people better; on how they can use modern methods of construction and ensuring that as volumes increase, build quality and customer service levels increase too. As we look to grow further there are of course challenges ahead. The new homes market is a relatively small part of the wider housing market, which relies heavily on political and economic stability. Getting land approved in principle through the planning system quickly enough remains a challenge, as does recruiting the amount of people we need to actually build the homes. These, though, are challenges the industry is in good shape to tackle, and it is committed to doing so and helping to deliver the homes this country desperately needs. 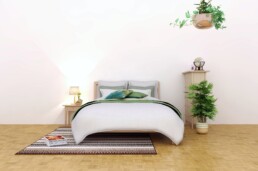 Keep up to date with news and events in your area by subscribing to our monthly community newsletter.